Available Delivery to Anywhere in Ohio

Built for those who want to share a lifetime of success with the people they hold dear. The All-New Wagoneer and Grand Wagoneer reinterpret their own legacies and take the premium SUV into uncharted territories of style, comfort and adventure. These are more than sport utility vehicles. They’re the means to make exceptional memories and create your own legend. 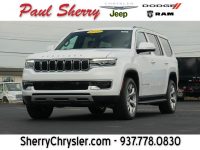 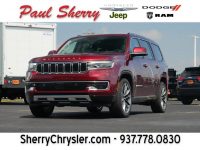 The Sherry Chrysler team is ready to help you find the Jeep Grand Wagoneer you’ve been waiting for. We are Ohio’s leading Jeep dealer because of our commitment to our customers, simplified car buying services, excellent inventory of Jeep models, and our financing options for everyone. We even offer guaranteed financing for those with less than perfect credit.

We’re happy to offer the Jeep Grand Wagoneer for sale, and we’re confident that you’ll find the model that’s right for you. If you need any help in deciding what features and configuration you need, please don’t hesitate to email or call us, or stop in and speak with a team member when it’s convenient for you.

Available Delivery to Anywhere in Ohio

We know you’re eager to get the new Jeep Grand Wagoneer into your hands, which is why we make the process easier with our delivery services. We’re located in Piqua, Ohio, but we deliver Jeeps to customers all over the state. Whether you’re in Dayton, Columbus, Cincinnati, Piqua, Cleveland, we’re happy to bring your Wagoneer to you to save you money and time with traveling.

You can start the process of buying a new Grand Wagoneer on our website, so there’s no need to visit our dealership. Browse our entire Jeep inventory online. It includes detailed information, pricing, and photos for each vehicle, to help you decide on the one you want. You can always give us a call, too, and one of your team members will be happy to assist you in making your choice.

Let us know what you want, and we will walk you through the steps of buying your Grand Wagoneer and getting it delivered to your home. We’ll even bring the papers along to get the process completed while we’re there.

The Jeep Grand Wagoneer is likely to rival other popular three-row luxury SUVs for sale in Ohio, like the Yukon and Escalade. This SUV breathes luxury from the inside out, from its full-length transparent roof with incredible views to its sleek yet rugged exterior. The Grand Wagoneer is set to be a higher-end version of the regular Wagoneer, which will still offer three-row seating, but with a slightly shorter wheelbase and fewer luxury options.

Although the full details of the Grand Wagoneer have yet to be released, we do know that this SUV is going to be unlike any other Jeep SUV on the market. Currently, the concept vehicle is designed with a light-up front grille, a Selec-Terrain Traction Management System, a touchscreen passenger display, and detailed wood interior accents.

Jeep is also expected to release powertrain options for the Grand Wagoneer, along with a plug-in hybrid version to venture into eco-conscious territory. The various models and packages for the SUV are also under wraps, but Jeep has announced that a fully-loaded Grand Wagoneer will likely reach the $100,000 mark in Ohio, so customers will probably have several options to consider when shopping.

The interior of the new Grand Wagoneer for sale is what will probably be its most impressive feature. The cabin includes 45 inches of display surface between its passenger display, digital cluster, and its primary touchscreen interface. Each row of seating comes with a detailed piping design and luxurious comfort, while the extended wheelbase adds extra legroom and cargo area. Add to that a premium McIntosh audio system, and the cabin becomes an entertainment venue fit for the family.

Complete the form below to start your personal Jeep Wagoneer order with a knowledgeable member of our team.

Finance Disclaimer: Guaranteed financing based on lender criteria, down payment requirements, and credit approval. Not all applicants will qualify. See dealer for details.